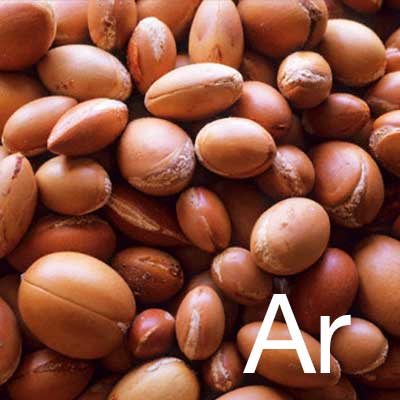 In ancient times, the Berbers of ancient Morocco would collect Argan pits from the waste of goats which climb the trees to eat their fruit. The pits were then ground and pressed to produce Argan oil, ready to be used for culinary and skin care purposes. Traditionally Argan oil is used as a treatment to prevent dry, flaky skin, reduce the appearance of skin blemishes and reduce the visible signs of ageing.

The genus Argania once covered North Africa and is now endangered, under protection of UNESCO. The Argan tree grows wild in semi-arid soil, its deep root system helping to protect against soil erosion and the northern advance of the Sahara. The canopy of the Argan tree also provides shade for other agricultural products and its leaves and fruit provide food for animals. A recent BBC report showed that women working with Argan Oil co-operatives are earning an independent income which allows them to pay for their own education and their children’s education. The success of Argan Oil co-operatives has also encouraged the development of other co-operatives.

Argan oil remains one of the rarest oils in the world due to the small and very specific growing areas. The production of Argan Oil helps to ensure that Argan Trees are valued and protected, instead of being cut down for fire wood or cleared to make way for grazing for animals.

Here in modern times, we skip the goats. Too messy. Instead the unroasted Argan fruit is harvested directly from the tree and processed using a mixture of traditional and modern techniques. It is then filtered multiple times to produce a clear, high quality oil, rich in essential vitamins, especially Vitamin E, and essential unsaturated fatty acids.