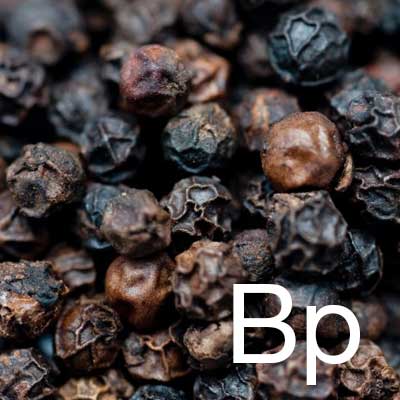 This humble spice has been the cause of war between nations, demanded as a tribute from besieged cities and the wealth of nations being created by the trade of pepper. Often referred to “black gold”, it was so valuable, it was used as collateral and even currency. Black peppercorns were found stuffed in the nostrils of Ramesses II, placed there as part of the mummification rituals shortly after his death in 1213 BCE.
During the Middle Ages, it is commonly believed Black Pepper to have a preservative effect and was used with partially rotten meat to prevent sickness.
Piperine, the compound that gives pepper it’s spiciness, has antimicrobial properties and It has been shown that piperine can dramatically increase absorption of vital nutrients.

Black pepper has a strong spicy scent and generally stimulating, this spicy oil has been used as a male aphrodisiac for more than three hundred years.