Skip to content
Antioxidants: The Unsung Superheroes in Skincare

ANTIOXIDANTS: THE UNSUNG SUPERHEROES IN SKINCARE

Whether you eat antioxidants or put them on your skin – these molecules are vital to your health. For years, the discussion of your body and antioxidants started and stopped with blueberries. The tiny indigo fruit has been known as a powerhouse for your body, but lately the focus has shifted to include even more antioxidants. Why? It turns out they’re all outstanding for your body… and your skin!!

At the molecular level, atoms are at their happiest when it’s paired up with the right number of electrons. Free radicals are atoms or a group of atoms with an unpaired electron which make them highly unstable.

When free radicals don’t have the right number of electrons, to stabilise itself, it can steal an electron from a neighbouring molecule (i.e Oxidation). That molecule now ends up with an unpaired electron and wants an extra electron so it steals one from another molecule… causing a never-ending chain reaction. 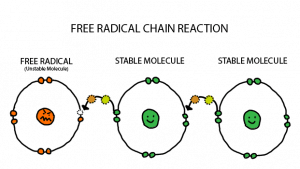 What is an Antioxidant?

Antioxidants as the word suggests, prevent oxidation from occurring. In the molecular world, antioxidants are truly altruistic. Just as free radicals have an unpaired electron, antioxidants have spare electrons it will donate – without expecting to get one back.

When an antioxidant donates its spare electron to a free radical, it stabilises the molecule and essentially stops the chain reaction of electron stealing – acting as a molecular peace-keeper. The beauty of an antioxidant is that it doesn’t then become a free radical because it oxides itself. 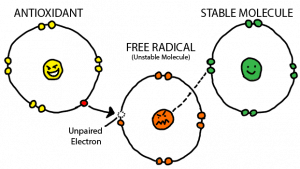 What causes free radicals to form?

Free radicals occur as part of a natural metabolic processes in the body such as respiration and are also a vital part of the body’s natural defences (for example immune cells use free radicals to fight invading bacteria). However too many and in the wrong places, these free radicals can cause damage.

This is because external factors, such as pollution, poor diets, stress, cigarette smoke, industrial chemicals, alcohol and UV rays can generate so many free radicals, the body’s natural defences are overwhelmed – a phenomenon known as oxidative stress – which causes free radical damage at the cell level, one of the key ways in which skin (and your body) ages. Since your skin is the main interface between you and the outside world, that’s where free radicals form in the greatest amounts.

This Story Continues on Page 2